How To Choose The Best Weed, Tips From Experts! 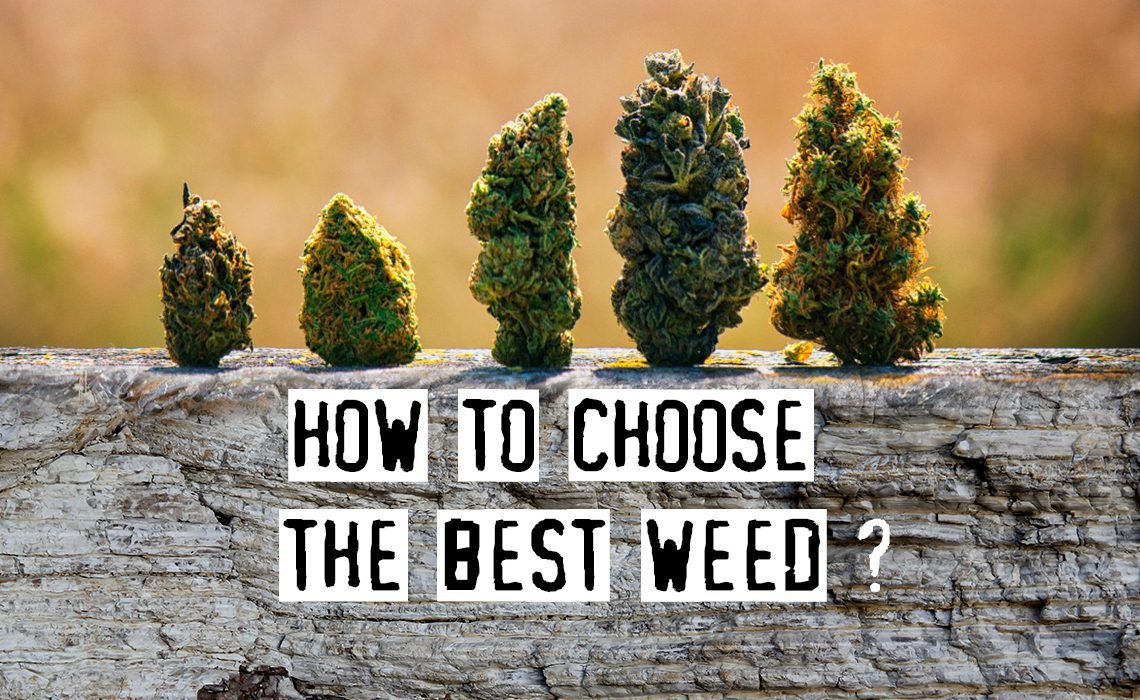 How to Choose the Best Marijuana

Many beginners to weed, both users and growers, have some difficulty on how to choose marijuana. Some think that all buds are the same, that they have similar characteristics and effects. But there are different types of weed, and choosing the wrong one can easily make or break an experience.

If it’s your first time to use or grow cannabis, then you should know their differences.

How to Identify Different Types of Weed or Marijuana Seeds

If you want to grow your own weed, then you have to learn how to identify different types of weed or marijuana seeds.

Simply put, regular cannabis seeds are just regular seeds. They have not been altered in any way either by adding chemicals or modifying their genes. These seeds are natural and purely organic.

So at about four to six weeks after planting them, check their pre-flowers. If you see small sacs instead of buds with pistils, throw them out. They’re probably male plants.

Another good type of weed seed for beginners is auto-flowering cannabis seeds. This type of seeds automatically starts their flowering cycle as soon as they reach a certain age, say for example at about six weeks of age. Moreover, auto-flowering seeds do not need that much attention compared to regular cannabis seeds.

These seeds are great to plant both indoors and outdoors.

If you’re after ample yields, then choose feminized cannabis seeds. Simply put, these seeds have been engineered to produce only female plants. You don’t have to worry about male plants pollinating your female plants. Instead, you will be assured that your crop will all be female plants, all ready to produce buds and flowers once they begin their flowering cycle.

This type of seeds is perfect for growers who simply want to grow female plants in the hopes of growing their production as well as their supply of buds and flowers. However, this isn’t a good type of seed for those who want to create new types of cannabis strains.

Male cannabis seeds don’t produce any flowers or buds when they mature. It is for this reason why many growers throw male plants out before they start pollinating their female cannabis plants.

Btu male plants also have their uses. For one, you can breed them with female plants to create new strains. After all, we won’t have all these different and equally wonderful strains if it wasn’t for the male plants.

Simply put, female cannabis seeds, when they mature, produce the buds and flowers sought by recreational and medical cannabis users. These buds and flowers contain the highest amounts of essential cannabinoids, terpenes, flavonoids, and other oils and nutrients.

It’s relatively easy to spot a female from a male plant. At about six weeks when the plants start producing flowers, females produce white pistil hairs. These hair-like structures tell where the buds and flowers will grow. As the flowers mature, the white hairs turn into vivid orange or fiery red in color.

Male plants don’t produce pistil hairs, and instead of buds, they have pollen sacs.

What are the Different Types of Weed or Strains?

In addition to knowing the types of seeds, you also have to know what are the different types of weed or strains.

Indica plants have broader and wider leaves. They are also are deeper in color than Sativa. As the plant matures, it grows more leaves. It is also shorter in height at only about two to six feet tall. The buds it produces are denser, rounder, and plumper compared to Sativa, and it usually flowers at around six to eight weeks.

As for its effects, Indica is known to deeply relax both the mind and the body, so it is perfect to use during the night before sleeping. Compared to most strains, Indica is a powerful sleep aid that can help treat insomnia.

Sativa plants, on the other hand, have narrower and thinner leaves. The leaves are lighter in color compared to Indica. As it matures, it can grow to a height of eight to 15 feet tall with fewer leaves. At about 10 to 16 weeks of age, Sativa plants go into their flowering cycle, producing thinner, elongated, and more slender buds than Indica plants.

As for its effects, Sativa is known to energize and invigorate, so it’s perfect for daytime use. It can also relax the muscles and the mind, but it has more of an energizing effect that also boosts focus, productivity, and creativity.

Hybrids are simply a crossbreed of Indica and Sativa plants. Its characteristics and features typically lean toward its dominant gene. Let’s say for example the hybrid is 80% Sativa and 20% Indica, then it will have more of a Sativa look than an Indica.

As for its effects, again, it will depend on its dominant parent. If it’s more Indica than Sativa, then its effects will lean more on the Indica side.

If the strain is 50% Indica and 50% Sativa, then it will produce an evenly-balanced mental and physical high, which is loved by many beginners to cannabis use.

Of all the different types of marijuana, Ruderalis is, by far, the least known. Compared to Sativa, Indica, and Hybrids, Ruderalis isn’t known for its potent psychoactive effect. In fact, Ruderalis is a type of marijuana that contains a very low THC level.

Ruderalis typically grow in areas that have extremely cold climates such as Canada as well as Northern Russia. It also thrives well in Northern Europe. This plant usually flowers in about 10 weeks and grow to only about three feet tall.

As for its effect, Ruderalis is known for its calming and relaxing effect that doesn’t produce a high.

Types of Medical Marijuanas and Their Consuming Methods

There are different types of medical marijuana, and they differ in form and consuming method.

Smoking marijuana can already produce medicinal and therapeutic effects. After all, the cannabinoids will be entering your body.

This method of consuming marijuana produces the fastest onset of effects. The cannabinoids are immediately absorbed by the cells and join the bloodstream. One deep hit and you can already start feeling some of its effects.

How soon the effects can be felt will depend on the strain though, so you need to know how to choose a marijuana strain properly.

Do you need a boost in energy? Then use Sativa. Do you need complete full mind and body calming and sedating effect, then choose Indica.

Similar to smoking marijuana, you will also be inhaling the cannabinoids using this method. What makes it different from the former though is that you are reducing your risk of inhaling potentially harmful byproducts produced when the buds or flowers are burned. Today, vaporizing is preferred by many since it is a safer alternative to smoking.

Vaporizing also produces fast effects. You will already feel some effects after taking one inhalation. Again, this depends on the strain you used.

While smoking and vaporizing produces fast onset of effects, these effects though have a shorter duration compared to other methods. They do not last as long as ingesting cannabis edibles.

The onset of effects when you ingest cannabis is slower compared to smoking and vaporizing. This is because the cannabinoids will have to be processed by the digestive system first. After going through the digestive system, the cannabinoids will then go to the liver where they will, once again, be processed and converted into their smaller forms called metabolites. Effects can take anywhere between half an hour to a couple of hours.

Its onset of effects may be slower, but ingesting cannabis produces the longest duration of effects simply because they stay longer in the blood. Also, metabolites are more potent.

Topicals are best used for skin problems such as acne, psoriasis, and dermatitis. They can also be used for muscle aches, joint pain, headaches.

In this method, you only have to apply a small amount of the cannabis infused topical on the affected area. Effects can take effect immediately or after a few minutes, depending on the problem.

But before you apply cannabis infused topicals though, you first have to clean the area to make sure that the cells can properly absorb the cannabinoids. Once the cannabinoids activate the cannabinoid receptors in the skin cells, you will start feeling some of its effects.

Edibles can be used both for medicinal and recreational purposes. Medicinal cannabis edibles typically contain CBD, the non psychoactive compound found in cannabis. However, some edibles also contain THC. Their combination makes the therapeutic effects even more powerful.

As for recreational cannabis edibles, there are edibles nowadays that contain a high amount of THC. It can already give you a physical and mental high, but it won’t produce a strong hangover.

Similar to ingestion, it can take a while though before you feel its effects. The cannabinoids have to go through the digestive system and the liver before they join the bloodstream.

Oils and concentrates are other popular method of consuming cannabis. In this method, you only have to put a few drops of the cannabis oil or concentrate under your tongue. Once done, let it stay under your tongue for about a couple of minutes so the cells can absorb them better.

The onset of effects is faster compared to ingestion but slower than smoking and vaporizing. The duration of effects is also long and can take up to about four hours.

Of note, you can also apply oils and concentrates on the skin, joints, and muscles. You can also use it for headaches.

Marijuana is easily accessible nowadays, but if you’re a beginner to cannabis and would like to grow or buy weed, then you have to know how to choose the right marijuana for a beginner. Choosing the wrong type of seed or strain can significantly affect your experience.

Top Tips On How To Buy Weed Safely