Way Too High? Tips on How To Stop Being High From Weed 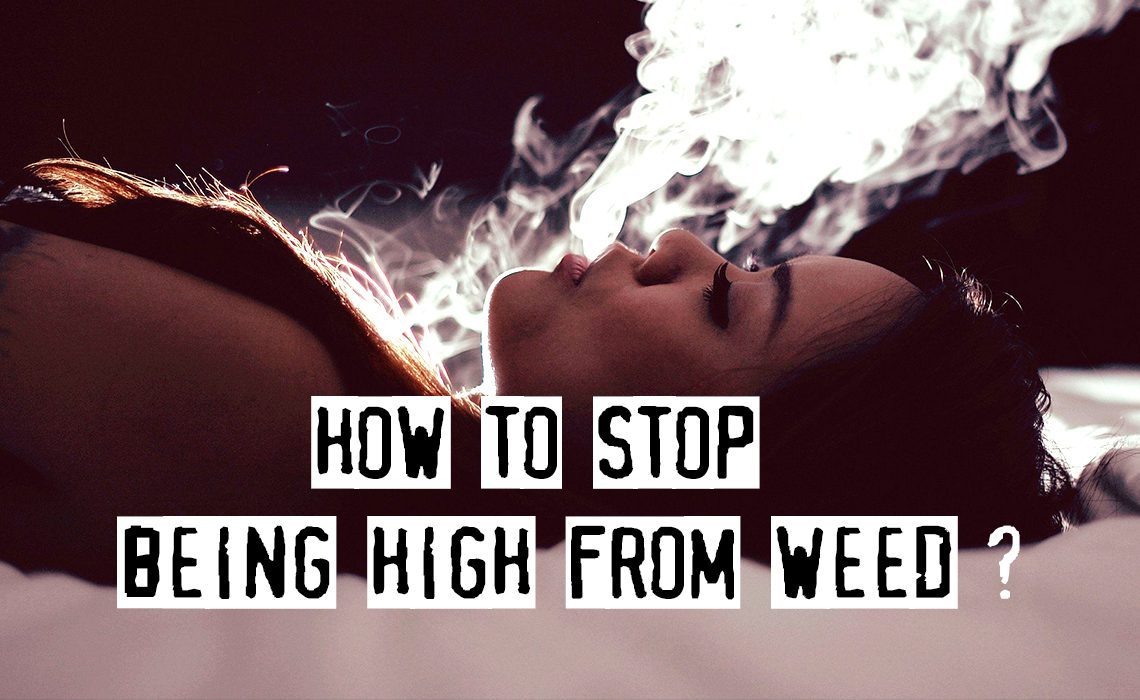 How to Stop Being High

So you’ve had too much cannabis and are now feeling uncomfortable, how then do you stop being high? Are there things you can do on how to come down from a high?

Fortunately, there are some steps that you can take to at least take some of the edges off of your high.

How could cannabis affect your body and how do you stop being high?

Before we go to the steps on how to stop being high fast, let’s first explore the effects of cannabis on the body.

Cannabis produces psychological effects. It is known to cause some temporary hallucinations as well as induce paranoia and anxiety. In fact, some users report feeling unreasonably mistrustful of others while they are under the influence of cannabis.

Other psychological effects of cannabis include heightened senses and altered perception of time. Things seem to go slowly and old experiences seem new. Colors seem brighter, and music seems more meaningful. Some even say that cannabis boosts their focus and creativity.

But the psychological effects of cannabis are subjective though and may differ from one individual to another. What you experience isn’t necessarily the same as your friend’s.

Cannabis is also known to produce somatic or physical effects. You will notice some reddening and dryness of your eyes, and you will also notice some dryness of the mouth.

But some physical effects of cannabis can actually help relieve several symptoms. It relaxes the muscles, and it reduces pain. It can also decrease headaches, joint aches, and back pain. Applied on the skin, it can help relieve acne, psoriasis, dermatitis, rosacea, and pruritus.

These somatic effects are actually one of the reasons why cannabis is becoming a popular alternative to conventional drugs. They find that cannabis can help control their chronic medical problems.

It can’t be denied that cannabis has a mood stabilizing and uplifting effect. Consuming weed can help make you feel lighter, happier, and more contented. It can also make you feel more productive and creative as it increases your focus.

Cannabis can relieve these symptoms because it activates the endocannabinoid systems found in the brain regions responsible for these neurological functions, helping them function properly.

One of the cardiovascular effects of cannabis is vasodilation. It has the ability to dilate the vessels, allowing blood to flow freely. This effect is also why many people who use cannabis develop red eyes. The blood vessels in the eyes dilate, causing the redness in the eyes.

Because the blood vessels are dilated, many people using cannabis also report an increase in their resting heart rate. This effect can also cause some fluctuations in the blood pressure. This is why people with heart problems should not use cannabis. It can put some added stress to their heart, resulting in problems.

Ingesting cannabis, on the other hand, produces a longer lasting effect simply because the cannabinoids stay longer in the system. Its effects can last anywhere between four and ten hours, depending on the potency of the cannabis strain.

Other factors that affect the duration of effects are body weight, metabolism, medications they are taking, medical conditions, among others.

Tips on How to Stop Being High

Now that you know the effects of cannabis on the body, let’s now go to the tips on how to get rid of a high fast.

One of the tips on how to stop being high is to take a hot shower. In fact, many cannabis users swear by this technique of getting rid of a high quickly. Not only can it help relieve weed hangover, but it also has the ability to control cannabinoid hyperemesis syndrome. This is a condition characterized by nausea and vomiting caused by too much cannabis.

One rationale behind this is that we become “irritated” by the high levels of THC in the body, resulting in pain, nausea, and vomiting. Hot showers, especially prolonged ones, break the pain cycle and relieve the symptoms.

The best way to stop thinking of how uncomfortable you are is to take a walk. It will distract you from thinking of your discomfort, and the fresh air will also do you a lot of good.

So the next time you get pretty high, just talk a short walk outside. You can also walk with friends to be safer.

If you smoked an Indica strain, you will want nothing but to look for a nice bed or a couch and curl up on it. Indica is known to produce a very sedating and calming effect that fully relaxes both the mind and the body.

However, if the side effects are making you feel uncomfortable, then just simply rest. Give in to the urge of closing your eyes and sleep the effects off. When you wake up, you will be back to your normal self and the effects of cannabis would have worn off.

Of note, you might feel a little groggy, but this, too, will fade away in time.

A good tip many cannabis users share on how to stop being high off weed is to ingest about a pinch of black pepper. Black peppers contain a rich amount of terpene known as beta-caryophyllene. This is the primary terpene that gives black peppers their spiciness.

Now, beta-caryophyllene has a calming effect on the mind. It has the ability to reduce anxiety as well as relieve depression.  One whiff of ground black pepper can already produce a calming effect.

So if you’re feeling a bit paranoid after smoking cannabis and want to know how to stop being paranoid when high, then give black pepper a try.

One of the ways that our body gets rid of cannabis is through urination. When you consume cannabis, the cannabinoids will enter the bloodstream. As they join the bloodstream, they will also get filtered out by your kidneys, the main function of which is to filter the blood. Anything that the body doesn’t need becomes urine.

Now, if you’ve had too much cannabis, drinking plenty of water can help your body get rid of it.

In addition to this, drinking plenty of water can also help reduce some of the uncomfortable side effects such as dry eyes and dry mouth.

Caffeine has a way of making you feel more focused. It also helps clear the mind and relieves some of the lethargy caused by too much cannabis. So if you want to at least take some of the edges off your high, then caffeine may be able to help.

However, you should also be aware of the fact that caffeine can also bring on anxiety. It can make your heart palpitate, which can be very stressful.

So if you have heart problems or you know you react negatively to caffeine, please don’t try this method. There are other, better methods of controlling a high.

If you want to know how to stop a panic attack while high, a few drops of CBD oil under the tongue may be able to help you. Just let the oil or tincture dissolve under your tongue for a few minutes and wait for it to take away some of THC’s effects.

Do you need some distraction from your high? If so, then why not indulge yourself in a conversation with a friend? The conversation can take your mind off of your high. It can also relax you and reduce some of the paranoia and anxiety caused by THC.

So if you feel like your mind is working overtime and you can no longer focus on a single thought, then go look for a friend and strike up a conversation. You can also call a friend. A good, long talk with a friend can distract you and help you find your focus.

The moment you feel like paranoia and anxiety is setting in, stop and do some mindful breathing exercises. This technique can not only help clear your mind, but it will also help calm your nerves.

To do this, you need to inhale deeply through the nose and hold your breath for a few counts. Release your breath gently and slowly through the mouth. Do this for about ten times. If it doesn’t help calm you down, then repeat the process.

Breathing exercises can relax the mind and reduce some of the paranoia and anxiety triggered by consuming high THC strains.

Similar to CBD, there are terpenes that can actually dampen or reduce the psychoactive effects of THC. They have the ability to relax the mind, clear the fogginess, and reduce the symptoms of paranoia and anxiety.

Herbs and spices rich in calming terpenes include lavender, black pepper, and peppercorn. You can also try lemon. They have a fresh and invigorating scent that can distract you from your high. Their calming effects can also make you feel more focused as they clear your mind.

So keep these in mind the next time you smoke cannabis. They can be pretty handy in controlling your high.

If you want to reduce your high, then you need to find something to do that will help take your mind off of it. You can do some gardening around the house, or you can catch up on your reading. You can arrange your playlist, watch some movies, clean the house, or organize your cabinets.

You can do anything, really, as long as they are safe activities that won’t require your quick thinking and reflexes. You can even do some light exercises.

The thing to remember is that these activities should be relaxing and can help you regain some focus and calmness.

Getting high may be fun, but too much can actually be very uncomfortable. So if you’re having uncomfortable side effects and wondering how do you stop being high, just follow these simple steps and you’ll soon feel better. Think of these tips, too, before you buy cannabis and lit one, so you’ll always be prepared.

Pros And Cons of Cannabis Legalisation

Does Marijuana Help with Chronic Pain and Other Disorders