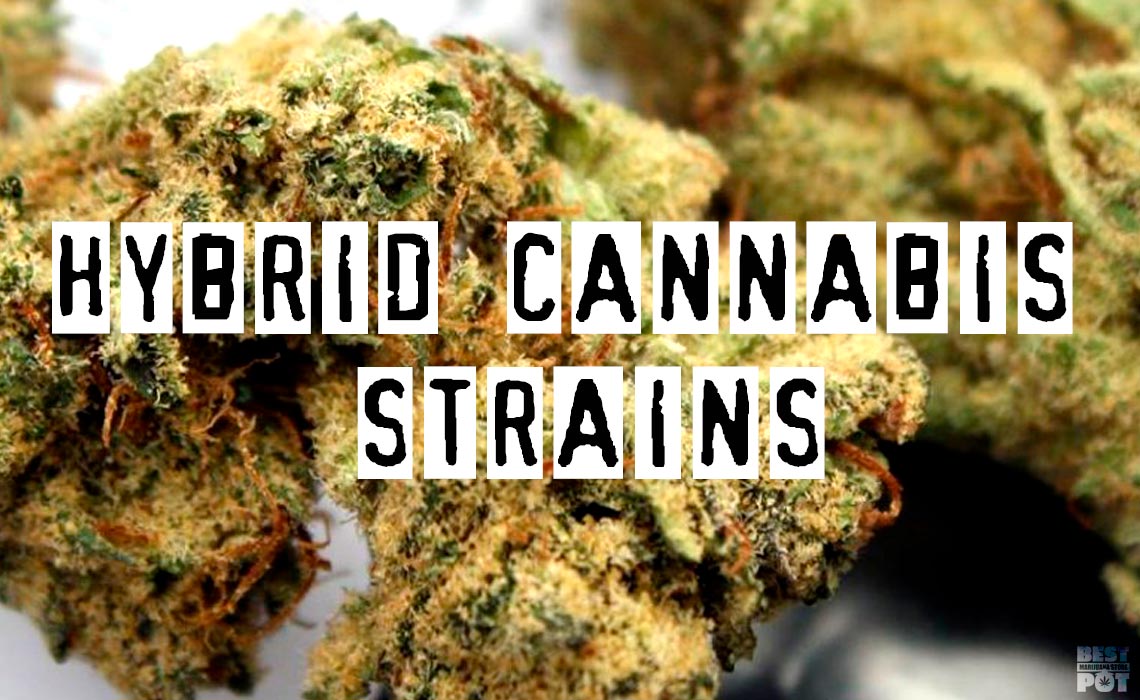 Hybrids cannabis strains are strains which have a combination of indica and sativa in them, although the more recent strains also have some hybrids in their lineage, as well. Hybrids normally take on the characteristics of the strain which is most prominent in their make-up &ndash. Sativa dominants will likely grow tall and have energizing effects, where indica dominants are short and stubby, prioritizing the effects of getting calm and relaxed. Hybrids are useful in the medical industry because they mix the general effects of both indica and sativa – they can therefore be used for different conditions – treating depression with cannabis becomes much easier when you can use a hybrid, which mitigates the worst effects of the sativa with the addition of indica.

This is a mix of indica and sativa, which is sativa dominant. Its parents are Blueberry and Haze, which leads it to have a sweet scent and taste, with berry overtones. It was created in California, and has since become a firm favorite among users. The overall effects are very gentle, and the strain balances relaxation with a slight boost of energy and creativity which allows you to focus. Blue Dream makes users feel happy and relaxed, making this strain perfect for people suffering from stress and depression. Euphoria and creativity are among other effects of this strain, meaning that it helps against pain and fatigue. This strain is moderately difficult to grow, it is like its sativa parent that grows very high, making it perhaps not the first choice for an indoor grow. The plant gives a high flowering yield.

GSC is unusual in that it is a hybrid which has a parent that is also a hybrid. Durban Poison is a sativa strain, but OG Kush is a hybrid, which is made up of unknown parents. GSC is much like an indica, in that it grows quickly (in under nine weeks), and remains very short (under thirty inches), so it is good for a first time indoor grow. However, the yield of this strain is not very good, so perhaps it is best for an individual rather than for commercial purposes. GSC is very good for people who need to feel relaxed and happy, and so it is often used for people who are suffering from stress and depression, or who need a reprieve from pain. The effects of GSC also include creativity and euphoria, making this a very good strain to use if you need some focus.

This is a strain of no known parentage, but it is extremely difficult to grow, and it grows to heights of more than seventy eight inches, so there must be at least some sativa in its genetic makeup. The flowering time for this strain is from seven to nine weeks, and the yield it gives is a moderate one. People who use this strain find that it has an earthy and woody scent, with overtones of pine to it. The effects include relaxation and sleepiness, which makes it good for treating stress, pain, and insomnia, but other effects such as euphoria and a feeling of being uplifted make it very useful in treating depression as well. The strain is a good all-rounder for people, being able to give them all kinds of effects without going overboard on any of them. This strain helps people with a variety of complaints.

The smell (pungent and earthy) and the look (thick with resin) of this strain both combine to let users know how powerful it is. The parents of this strain are South Indian indica, and South American sativa, and it has been around since the mid-nineties at least. First created in the Netherlands, it remains very popular there, but it is also well-known all over the world, although it is best kept for people who are used to the effects of cannabis, as this strain is extremely potent. Growing this sort is relatively easy, it gives a moderate yield, grows between thirty and seventy eight inches, and flowers in a short space of time. The effects include happiness and euphoria, making it very effective for fighting depression and pain, but also for relaxation, making it useful against stress, as well. This strain is very powerful, and should be handled carefully.

Formerly known as Gorilla Glue, this is a very potent form of cannabis, which was created from a combination of Chem’s Sister and Chocolate Diesel, both strong sativas. The strain has a very earthy smell, and it is quite pungent, so it is not an ideal strain to use when growing indoors, unless you have good ventilation. Since the strain comes from two sativa parents, it is also very tall, growing to heights of above seventy eight inches, and giving a medium yield in a very short space of time. The main uses for this strain is the relief of stress and pain, since the main effects are relaxation and euphoria, with feelings of happiness and uplifting mixed in. This is not a strain for beginners, with plenty of people saying that they found themselves unable to do anything for the entire day once they had taken the drug.

This strain has two parents – Hawaiian, a sativa, and Train Wreck, which is itself a hybrid (see below). It is a sativa dominant strain, which smells like fresh fruit, and is said to have a woody taste. This strain is moderately difficult to grow, and grows extremely tall, with a high yield from it. If it is grown indoors, then the growing time from planting to flowering is between seven to nine weeks. This strain is very helpful for people who are suffering from depression, as it gives a feeling of happiness and euphoria when used, and balances out the relaxing effects by also conferring a feeling of energy on to the user. Because of these effects, people may find that GG 4 is also helpful for combatting unwanted fatigue and stress, since it will allow people to fall asleep more easily, but also helps them focus now.

Train wreck is a hybrid which has three parents rather than the two which is usual for most of them – it has two sativas – Mexican and Thai – mixed with an Indica, Afghani. As a result, while it is easy to grow, it is best not done indoors, since it can reach heights of over seventy eight inches, and has a very high yield. The smell of the strain is earthy and lemony, with some sweetness to it. Because this is a sativa-dominant strain, many people reach for it when they need something to help deal with depression and fatigue, although it does have some relaxation effects as well. This strain has indica and sativa in it, so it is good for handling the more complex problems which come with pain and depression, allowing people to use Train Wreck to handle symptoms and conditions alike with the same strain of cannabis.

Unusually enough, this sativa-dominant strain has four parents. It was created in 1992 using a combination of South American, Mexican, and Thai (all sativas), and Afghani (a strong indica). Despite its strong sativa heritage, this doesn’t grow as tall as some other strains, only reaching a maximum of seventy eight inches, rather than growing any higher. It has a very large yield, and if grown indoors, it flowers within seven to eight weeks. The effects are happiness and relaxation, which means that this strain is good for both stress and depression, while also being useful in treating pain.

Headband is the child of OG Kush (a hybrid) and Sour Diesel (a sativa). As a result, it has a highly pungent smell, which gives off overtones of earthiness and diesel petrol. This is a difficult strain to grow, which goes to a height between thirty and seventy two inches, and gives a moderate yield. The effects of this strain include euphoria, happiness, and relaxation, which means that people reach for it when they want to handle symptoms of depression and pain. Stress is also affected, as is insomnia, because of creativity giving the mind something to focus on.

Chemdawg is a highly potent strain which has Nepalese (indica) and Thai (sativa) as its parents. This is a very strong smelling strain, so it is not ideal for either first-time users or first-time growers, as it grows to an excess of seventy eight inches. It gives a very high yield of resinous buds, which are what gives it the flavor of diesel and earth – that is what many people love about it. The main effects are relaxation and euphoria, which means that people reach out to this strain when they need immediate relief from the symptoms of stress and depression.

Is Pot Legal in Canada?