Is Weed Bad For You, We Have An Answer 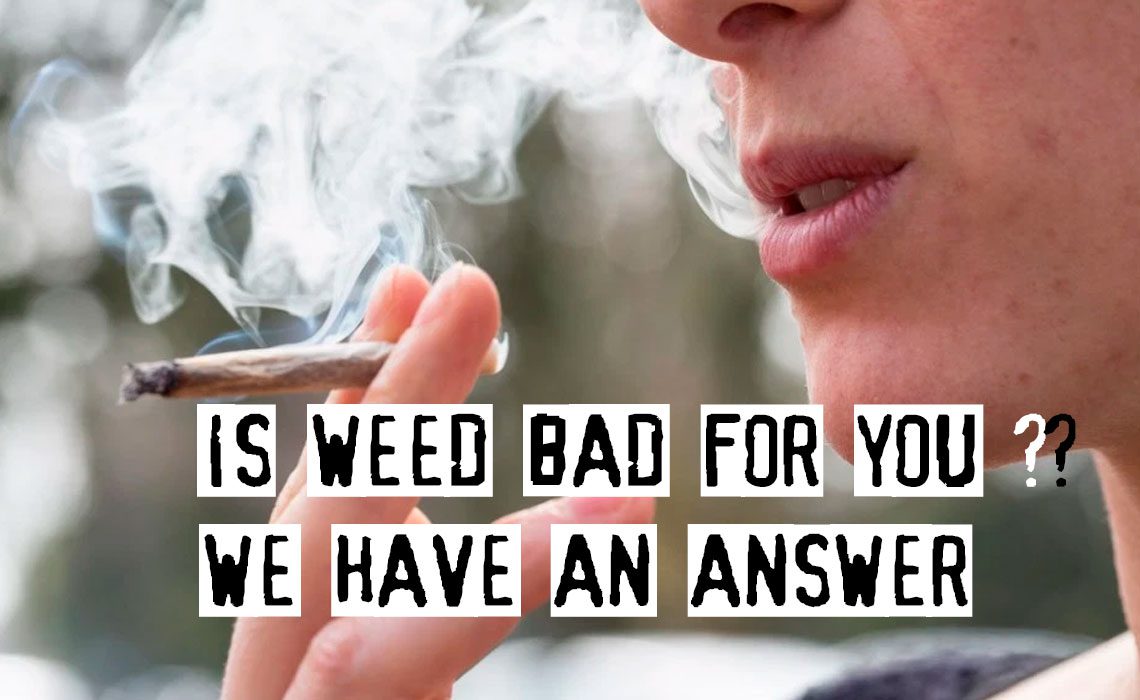 Is Weed Bad for You?

Ah, the age old question – is weed bad for you? Some people say it’s not, while there are also those that say it is.

Answering this question though is pretty tricky. On the one hand, weed does have a lot of benefits. But on the other hand, too much of it can also be detrimental to your health.

Let’s explore the pros and cons of why weed is bad or good for you.

Is Weed Harmless – Advantages of Marijuana

Is weed harmless? If we’re talking about its medicinal and therapeutic effects, then weed is not.

It can’t be denied that cannabis has the ability to reduce anxiety. In fact, many users report feeling immediate relief from their anxiety attacks and depression when they consume cannabis. Smoking weed leaves them feeling pretty happy and contented in life. It also makes them calmer and more relaxed.

One of the most powerful effects of cannabis is its ability to control pain. Consuming cannabis can significantly reduce pain caused by headaches, arthritis, low back pain, and muscle pain. Cannabis can control even the most intractable and hard to treat pain caused by nerve damage, fibromyalgia, and cancer pain.

Again, cannabis controls pain by activating the endocannabinoid system, one function of which is to regulate and modulate pain. The cannabinoids found in cannabis also bind to other receptors that are responsible for controlling pain.

Is marijuana bad for you? In this case, it’s not. Its analgesic effects are actually very helpful.

Cancer is a killer disease that takes the lives of millions of people yearly. Left untreated, the cancer cells will grow and travel to other parts of the body. Not only will the cancer cells invade the healthy tissues, but they will also make it difficult to beat cancer.

Opioids have long been used as a powerful analgesic. Unfortunately, opioids are also highly addictive and can cause an overdose. In fact, opioid addiction and overdose have already killed hundreds of thousands of people.

Cannabis, on the other hand, is not only a potent analgesic but it is also a safer alternative to opioids. According to a study done in the United States, states that have legalized the use of medical cannabis have seen a decrease in the number of people using opioid based medications for pain. The study found that an increasing number of people are switching to cannabis for pain control.

Nausea and vomiting are just some of the symptoms of many diseases. But these two can wreak havoc on the human body.

If you’re sick and/or recovering from a medical condition, you need nutrients to be able to fight the disease. Unfortunately, nausea and vomiting can prevent your body from getting the nutrients it needs.

Is weed harmful – Disadvantages of Marijuana

Is weed harmful? Yes, weed is bad for you if you regularly use too much of it. It can also be harmful to the body, especially to a developing brain.

One of the many arguments of smoking cannabis is that it increases your risks of developing lung cancer.

When you smoke cannabis, you will also be burning the joint or cigar paper. Now, as the paper and marijuana combust, they produce harmful byproducts that get deposited in the lungs. Constant exposure to cannabis smoke and the fact that these byproducts can irritate your lungs increase your risk of acquiring lung problems.

In addition to this, the smoke itself from burning paper and cannabis already contains high levels of carcinogens. These carcinogens, studies found, cause lung tissue damage that can lead to lung cancer.

Smoking cannabis has a negative impact on a developing brain. In fact, studies have shown that early and prolonged exposure to cannabis can cause a decline in one’s IQ by about 8 points.

So, is smoking weed bad for you? Yes, especially if you started smoking weed at a very young age before the brain has fully developed.

Similar to other illicit drugs like opioid and heroin, cannabis can also be pretty addictive that you can become dependent on it. After all, these drugs all stimulate the brain’s pleasure and reward system.

CBD, studies revealed, is the complete opposite of THC when it comes to dependence and addiction. Scientists found that CBD can actually control this THC effect since CBD has the ability to inhibit or dampen the brain’s reward and pleasure centers.

If you have a family history of schizophrenia, then using cannabis can increase your risk of developing early onset schizophrenia. The more you smoke cannabis and the longer you use it, the higher the risk becomes.

Studies also showed that cannabis use also increases the risk of developing psychosis, especially if you have a family history of this mental health problem. The risk is also increased if you started using cannabis during your adolescent years.

Remember, cannabis has a negative effect on a young and developing brain. It can cause changes in the brain that contribute to the development of mental health problems.

Some women use cannabis during their pregnancy to control extreme nausea and vomiting. While cannabis helps control these pregnancy symptoms, you should know that it also has an effect on the fetus.

As for long term consequences, prenatal exposure to cannabis can result in cognitive impairments of the child. Some of these include impulsivity and hyperactivity as well as memory problems.

How bad is weed for you, especially if you’re pregnant? It can cause long lasting negative effects that the child has to carry the rest of his life.

Weed can be both good and bad. But you can reduce some of its dangers if you avoid these common mistakes.

Ever wondered what that little hole on the side of the bowl is? That little hole is a carb. It is used to control the flow of air into the bowl and up the pipe. Many beginners to smoking cannabis do not know how to use the carb properly. They either keep their finger on it the whole time or they fail to plug the hole.

The correct way of using the carb is to cover the carb when you’re lighting up and taking a hit. This way, the smoke can accumulate in the bowl. If you think you have had a sufficient pull, then simply release the hole and continue inhaling.

Incorrectly using the carb can cause you to cough and irritate your throat.

You expected to feel certain effects but then became disappointed because the effects were not all that you expected.

One cause of this mistake may be your choice of strain. You simply chose the wrong type of strain.

If you’re going to use cannabis for medicinal purposes, it’s very important that you know your strain properly. Let us say for example that you need weed to help you sleep. But instead of choosing an Indica strain, which is known for its sedating and relaxing effect, you chose a Sativa strain. Of course, it will ruin your experience since Sativa energizes and invigorates.

So, how is smoking weed bad for you? If you chose the wrong strain, it can definitely ruin the experience.

There really are a lot of smoking devices that you can choose from. You have joints and blunts, and these are marijuana buds rolled in paper. You have spliffs, which are simply a combination of weed and tobacco rolled in the joint or cigar paper.

You also have pipes, bongs, bowls, vaporizers, among others. They all differ in use, of course. For example, in vaporizers, the cannabis vape oil is heated up by the coil to release and activate the cannabinoids. In pipes, you place the ground buds in the bowl, light it up, and inhale the smoke.

Not knowing what to use or how to use them can significantly ruin your experience.

How exactly can you identify a good weed from a bad weed? How will you know that the buds you have are of premium quality?

Well, there is only one way of assuring yourself that what you’re buying is of excellent quality. And that is to buy cannabis only from a provider that you trust. So if you’re going to buy weed online, then check their customer reviews and feedback. Ask your friends where they buy their buds from.

Once you have your buds, check if they appear frosty and covered by little crystals. The bud should also feel spongy but not squishy wet.

Why is smoking weed bad for you? Because you have allowed your tolerance to cannabis to build.

Your tolerance to cannabis has increased that you will need to consume more weed so you will feel the same effects. This can happen to both medical and recreational cannabis. Your body gets used to the dosage that you will need higher ones in order to feel its full effects.

If you do not want this to happen to you, then take tolerance breaks. This means abstaining from cannabis for a few days, maybe even a couple of weeks, to reset your system.

Cannabis is both good and bad. It has many therapeutic effects that benefit us, but it also has its own negative side effects. You can minimize these risks by avoiding the common mistakes of using cannabis.