Know Your Strain – Indica vs Sativa vs Hybrid 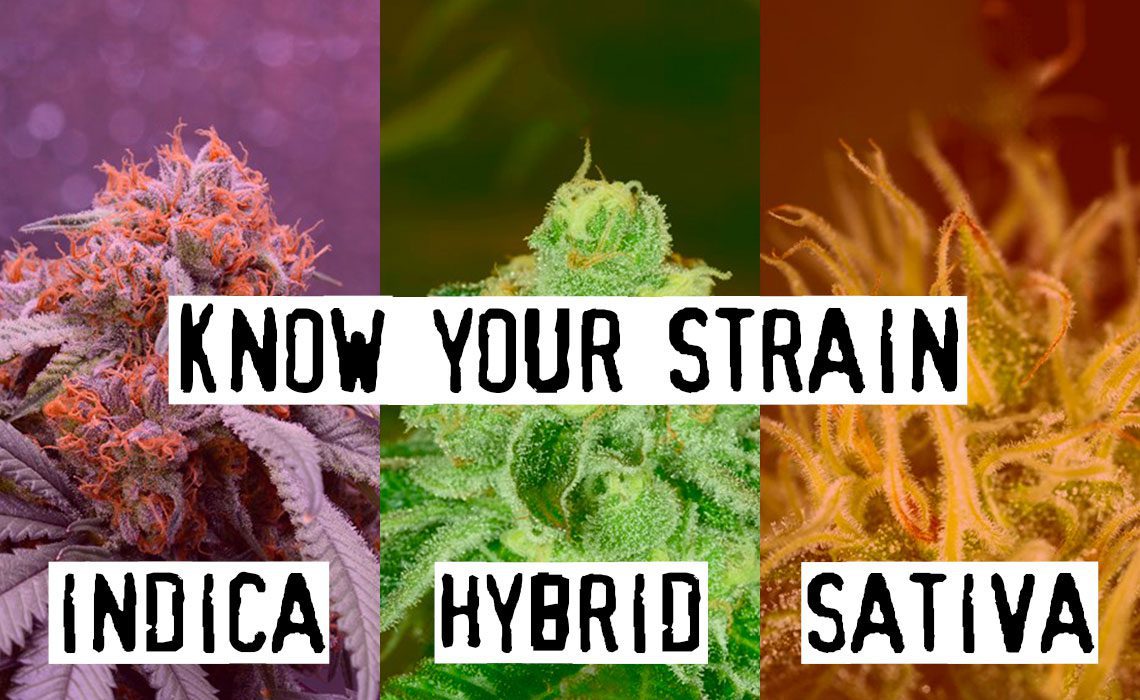 Some novice weed users think that marijuana
plants are one and the same. They all produce highs; therefore, they are the
same cannabis plants.

This isn’t true though. There are actually two
major types of marijuana plants, and they both have their own unique
characteristics. You have Indica vs Sativa.

Then there are also the different marijuana
Hybrids strains. These are the strains created by crossing Sativas and Indicas.

These three – Sativa, Indica, and the
different Hybrids – all have their own differences, unique characteristics, and
cerebral highs.

Whether you’re taking marijuana for
recreational or medicinal purposes, knowing the different strains is important.
It can save you from costly mistakes, and you’ll have the knowledge to choose
the best strain suited for you.

The
Origins – A Brief History of Sativa, Indica, and Hybrid

Cannabis Sativa originally came from the
Equatorial countries such as Mexico and Columbia as well as Southeast Asian
countries like Thailand. They typically thrive in warmer climates. During the
early 1750s, Cannabis Sativa was the only recognized marijuana species.

However, about three decades later, another
type of marijuana was discovered in India. They were also found in Middle
Eastern countries such as Afghanistan as well as Pakistan. This new marijuana
type has different features and effects than Sativa that it was recognized as a
new species, the Cannabis Indica. Indicas typically thrive well in cooler climates.

Classifying cannabis into Sativa and Indica
has become a common practice. But as years passed, cannabis breeders and
cultivators began cross-breeding the two types, giving birth to the Hybrids.
They began creating different Hybrid strains that highlight the best features
of both Sativa and Indica. Some strains are Sativa-dominant, Indica-dominant,
or an equal mix of both at 50% Sativa and 50% Indica.

It’s actually relatively easy to
distinguish Indica vs Sativa plants. You can easily recognize them at first
look.

Sativa plants are tall and thin. They can
grow to a height of 10 to even 20 feet. Sativa plants also have long and
skinnier branches.

They have a longer maturation period of
about 10 to 16 weeks. It’s worth the wait though since one plant can produce as
much as a 3-ounce yield.

Indica plants are shorter and stouter. They
grow to a height of about 2 to 4 feet. Indica plants also have shorter branches,
and these branches are fewer in number compared to Sativas.

Indicas have a shorter maturation period
compared to Sativas. They mature at about 6 to 8 weeks before you can harvest
them. Although they mature faster than Sativas, they also produce a smaller
yield of about 1.5 to 2.5 ounce per plant.

It’s also easy to recognize a Sativa from
an Indica plant based on its leaves alone.

Sativas are easily recognizable by their
long, narrow, and skinny leaves. Its leaves are usually light green in color.

Indicas, on the other hand, have shorter,
broader, and fatter leaves. They are dark green in color compared to Sativas.

The leaves of the cannabis hybrids are also
mixed features of its parent strains. Some have narrower leaves due to their
Sativa-dominant genetic makeup, while others have broader leaves from their
Indica-dominant traits.

You can easily tell whether you have a
Sativa or an Indica bud.

Similar to its plant and leaf structures,
Sativa buds are long and cylindrical in shape. They are sparse and look very
delicate in appearance. The Sativa buds typically have an orangish to reddish
hue.

Indica buds, on the other hand, are short
and round in appearance, much like its plant and leaf structures. Compared to
Sativas, they are heavy, densely-packed, and very sturdy in appearance. Indica
buds typically have a purplish hue.

The cannabis hybrids’ buds share the
characteristic features of both Sativa and Indica buds. Their physical
appearance though depends on which parent strain is more dominant.

Differences
in Aromas and Flavors

The different marijuana types have their
own distinct aroma and flavor.

Sativas have more of an earthy, woody,
pungent, and skunky aroma. It also tastes almost the same with hints of pine
and spices.

Indicas have a sweet, fruity, and flowery
aroma. It also has a wide range of flavors, depending on its genetic makeup and
terpene profile. Some have robust flavors of citrus fruits like lemon, lime,
and oranges. Others have berry flavors like strawberry, blueberry, as well as
blackberry. It’s also not unusual to get hints of tropical fruits like pineapple
and banana.

The cannabis hybrid strains will have a mix
of Sativa and Indica aromas and flavors. You’ll get earthy and pungent with
hints of fruits and spices. Or you’ll get robust sweet and fruity with hints of
diesel and skunk. The hybrids’ flavors and aromas depend on which marijuana
type is more dominant.

In addition to knowing the physical
differences of the three major types of weed, it’s also important that you know
and understand their different effects.

Best for: Morning use. It can help boost
mood and energy.

– Appetite and
weight loss in gastrointestinal problems, chemotherapy, and anorexia.

Effects: The potent full-body relaxing
effects of Indicas can put you in a couch-lock. This is a strong, heavy feeling
in all your extremities and whole body. You will want to do nothing but simply
lie around and just be lazy. The deep, whole body relaxation slows you down and
even induces deep sleep. Indica is also known to uplift mood.

Best for: Evening use. It can help relax
your mind and body for better rest and sleep.

– Chronic and
treatment-resistant pain like nerve pain from multiple sclerosis.

– Inflammation
and pain caused by arthritis.

– Nausea and
vomiting in chemotherapy.

Cannabinoid Content: Depends on whether it
is a Sativa-dominant, Indica-dominant strain, or equally-balanced hybrid
strain.

Highs: Depends on which trait is more
dominant, Sativa or Indica or an equal mix of the two.

Effects: The effects of hybrid strains are
wide-ranged and typically depend on its dominant trait.

Sativa-dominant hybrid strains are more
energizing and uplifting, but its Indica traits will also induce relaxation of
the whole body. The user still gets to experience the powerful cerebral high
associated with Sativa-dominant strains but with fewer risks of developing
paranoia and anxiety symptoms.

On the other hand, Indica-dominant hybrid
strains promote whole-body relaxation, but its Sativa traits prevent the user
from having a total couch-lock. The user will get to enjoy a pain-free and
relaxing time without affecting his mental clarity and alertness.

Equally-balanced hybrid strains are best
known for their smooth and well-balanced cerebral high that gently transitions
into relaxation and sedation.

Best for: Morning, midday, and evening use.
Again, this depends on its more dominant trait.

– Chronic pain
and inflammation like rheumatoid arthritis and osteoarthritis.

Sativa, Indica, and Hybrids are just the
major marijuana types. Under each classification are still more types of
Sativas, Indicas, and Hybrids.

If you want to use weeds for recreational
and/or medical purposes, knowing the difference between Indica vs Sativa vs Hybrids
will help you choose the marijuana type that will fit your needs best. You may
also want to do some research online, read reviews, or talk with a cannabis
expert about the different strains.

How To Choose The Best Weed, Tips From Experts!

Does Marijuana Affect Your Sleep?